Next weekend marks the 10th anniversary of the Dublin Book Festival which takes place in Smock Alley Theatre and various locations around the city. For four days a series of interviews, events, workshops and debates will celebrate the wonderful pleasure of reading books, as people come together in groups to celebrate something we usually do when we are alone.

Reading is generally a very private experience. We sit down in our favourite chair, or curl up in bed and we lose ourselves in a world of words, characters and stories. Sometimes, when a book has really struck a chord with us we seek out others who have read it to share our thoughts and reactions. We join book clubs to discuss what we have enjoyed or what has irked and bored us. Yet, very rarely do we actually read together.

In 2009 I read Ulysses for the first time. I immediately fell in love with it. Sure, I didn’t understand it all – nobody does – but there was at least one thing, often many things, on each page that grabbed me and intrigued me. Slowly I was seduced by its mystery. When I reached the final page and the novel’s final ‘yes’ I was filled with a tremendous sense of pride at having climbed literature’s Everest, but I had no one with whom to share the view. I had nobody to talk to about it. Just then serendipity struck its resonant gong.

A man walked into my local pub – a pub owned by a cousin of his and a pub where I had been a resident musician for over a decade – and he stated his desire to host a reading group of James Joyce’s Ulysses. So when the pub’s owner asked me to come down the following Tuesday night to support a Ulysses reading I couldn’t believe my luck. What I was looking for had landed in my lap.

Excited as I was, I immediately became wary. Who was this unknown Joycean waltzing into my world? I had become quite precious about this special book. My experience of reading it for the first time had been profound and very personal and I didn’t want some pompous academic telling me what to think. I arrived on Tuesday evening prepared for whatever pretentious scholar might greet me.

In walked PJ – wild, silver, windswept hair; a colourful dicky bow; airs, graces, and an aristocratic lisp to match – and I thought, here we go, my adversary, the pompous scholar has arrived. I could not have been more wrong. Appearances can sometimes be deceiving and I quickly realised that this eccentric gentlemen had no trace of imperiousness or arrogance. I sensed this was the beginning of a beautiful friendship.

PJ had brought with him a box of twenty fresh paperbacks. Copies were passed around to all who were interested, and without any fanfare or introduction, we began to read. As stately, plump Buck Mulligan came from the stairhead I began my second journey through the novel. This time with friends.

By the end of that first reading I was hooked. The experience of reading those words aloud was exhilarating and incredible fun. Not since our schooldays have we read aloud from a book in a group, and back then, it was no pleasure at all. One simply prayed not to make a mistake for fear of ridicule and mockery. But this! This was something different. Sure, the fear was there. Nobody wanted to make a balls of it. But mistakes were celebrated, we called them Joycean slips, and as with the Freudian variety they were often very revealing. And the language was fantastic. Like nothing you had read before. And this Martello tower? We all knew it. It was only a couple of miles up the road. This fictional universe was our stomping ground. And we were drinking pints. Some of the best pints in south Dublin, might I add. For the next four years I would not miss a single Tuesday night reading and neither would PJ. 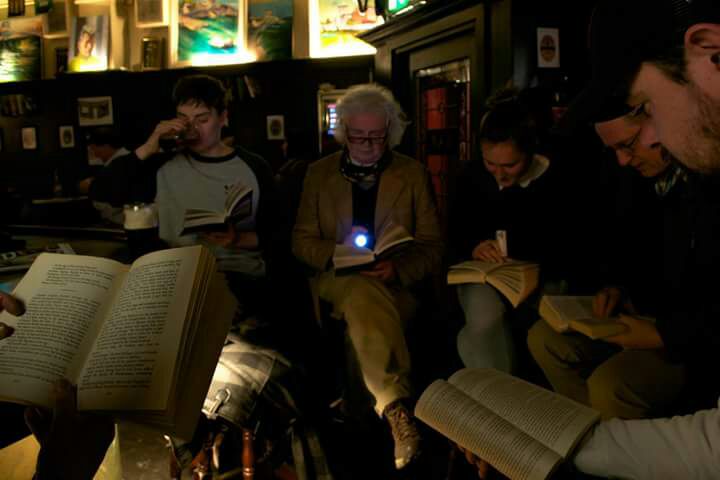 Over those years of Tuesday nights we went around the novel five or six times. Many different voices read Joyce’s words in that room, many different accents, local and foreign, young and old, male and female. We read Joyce’s words out loud over the sound of the jukebox, sometimes competing with the roar of barroom chatter and bawdy jokes – ‘mirthless high malicious laughter’.

O’Donohoe’s in Blackrock was not a large pub. It was a small room with a tight group of regulars, very few of whom had any interest in reading, never mind Joyce. In fact, at times one could feel the sneer crossing the room like a dark shadow as we sat in our little circle with our heads bowed and our ears straining to hear one another. But we wouldn’t have had it any other way. The room was like a microcosm of public opinion of James Joyce. Many Irish people view Joyceans as self-important elitists. Some have heard Joyce’s stated claim that he wanted keep the scholars arguing for centuries over what he meant. Rather than feel ashamed at not having read this towering monument of Irish culture it is easier for the Irishman to write it off as wantonly obscure. Still, many a time, as the philistines passed by our group on their way to the toilets and overheard a snippet of a dialogue or a spellbinding line of text, in that moment even the coldest among them felt there was something special on those pages. And when the explosions of laughter came from the ones in the room with their heads buried in books you knew the gang at the other end of the bar felt they were missing out. The shadow of their sneer dissolved in their envy. The craic was all ours.

In 2014, very sadly, suddenly and without warning, it was announced that O’Donohoe’s pub was to close down. PJ’s cousin had been forced to pass on ownership of the licensed premises into the cold hands of NAMA (National Asset Management Agency). The pub was doing a good trade but the mortgage was simply too high. Many hearts were broken. O’D’s was a rarity in south Dublin, a public house in the old sense of the word, a special community gathering place where many friendships were formed, many wild nights melded into mornings, and many voices read some of the greatest language ever written, under the dartboard, beside the piano.

R.I.P. O’Donohoe’s pub on Blackrock Main Street. ‘I was blue mouldy for the want of that pint I declare to God I could hear it hit the pit of my stomach with a click.’

Myself and my dear friend PJ are currently searching for the perfect pub in which to resurrect our famous Tuesday night Ulysses readings. Somewhere with a cosy corner, a few philistines and a jukebox would be ideal!

Send suggestions on a postcard to O’Donohoe’s pub, 17 Blackrock Main Street. Or just put it in a text!